Make a joyful noise unto the Lord!

For our 2022-23 concert season Music at St. Andrew's presents the Opus 25 Inaugural Concert Series. From our October 2 Dedicatory Recital to Franz Liszt's Via Crucis on April 2, this concert series will be filled with the joyous sounds of our new Richards, Fowkes & Co. instrument!

Funding provided by donations to the Organ Fund.
Learn more about Opus 25.

St. Andrew's is home to a diverse music program which includes four vocal choirs, two handbell choirs, multiple full orchestra Eucharist performances per year, as well as a monthly concert series and additional seasonal programming. Whether you're 8 or 80, there are musical opportunities for you.

Please consider sharing your musical gift at the 10:00 am service. Younger soloists are invited to perform at the 9:15 am Family Eucharist - a great place to share their budding gift and serve as a role model for our youngest parishioners.

Volunteer your time for music publicity

Interested in contributing to our Music Ministry but feel your talents lie elsewhere? We can always use help with music related mailings and general publicity.

In honor of Fr. Alan’s legacy of music cultivation in our parish, the Rev. Alan Gibson Choir Scholar Scholarship fund has been established. Scholarships will be awarded to qualified full-time college level music majors, and they will then sing in the Adult Choir for the Academic year. Donations are welcomed, contact Dr. Deborah Friauff for more information. 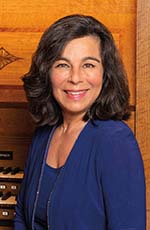 A versatile musician, Dr. Deborah Friauff performs professionally as a soprano, organist, and conductor. As Director of Music and Organist at St. Andrew's Episcopal Church in Ann Arbor, she oversees four parish choirs, organizes an annual concert series, chants and directs a weekly Compline service as well as other weekly and special liturgical events.

A native of Traverse City, she began studying the organ at the age of eight with Betty Kurtz. She graduated with honors from Interlochen Arts Academy as an organ major under Robert Murphy, and also studied viola with David Holland and voice with Kenneth Jewell and Carolyn Grimes. After completing Bachelor and Master of Music degrees in organ at the University of Michigan under Marilyn Mason, Dr. Friauff was awarded the Georges Lurcy Fellowship for study in France.

In France she studied with renowned recitalist Marie-Claire Alain at the Conservatoire National de Région, concentrating on the works of Jehan Alain, and was unanimously awarded the Premier Prix d'Orgue with the felicitations of the jury. She was also a prize winner in the Chicago Club of Women Organists Gruenstein competition, and the International Undergraduate Organ competition in Ottumwa, Iowa. Dr. Friauff completed her DMA degree in organ at the University of Michigan under Robert Glasgow. She has performed across the country in venues such as the San Anselmo Organ Festival in California and the Piccolo Spoleto Arts Festival in Charleston, South Carolina, as well as for Conventions of the American Guild of Organists and the Organ Historical Society. Her performance at the 1995 National Convention of the Organ Historical Society has been issued on the OHS label. She has also served as Adjunct Professor of Organ at Eastern Michigan University.

As a singer, she has studied with Frances Brockington at Wayne State University and coached with Jane Heirich, Wendy Bloom and Ellen Hargis, and has sung soprano in the professional early music vocal ensemble VOX. She has studied Gregorian chant at St. Meinrad Seminary in Indiana with Columba Kelly, OSB, and at St. John's University in Collegeville, Minnesota with Anthony Ruff, OSB. Further studies have recently been undertaken over two summers at the University of British Columbia's Early Music Vancouver festival. There she has studied medieval vocal music with members of Sequentia in the Medieval Music Programme, and Baroque vocal music and movement in the Baroque Vocal Programme with Ellen Hargis and Steven Adby. She founded the St. Thomas Chant Schola in Ann Arbor, and has directed three Michigan-based early music ensembles: Sine Nomine of East Lansing, Michigan, the Ann Arbor Grail Singers, and Eastern Michigan University's Collegium Musicum. Currently, she sings soprano in the Baroque Ensemble Voci dell'Anima, working with co-founders Pamela Ruiter-Feenstra (organ/harpsichord) and Debra Lonergan (gamba).

Music at St. Andrew's relies on the financial and logistical support of benefactors and parishioners. Without your help we are unable to bring such glorious music to life.

Please consider giving your time and energy to our music ministries or give a financial gift to the St. Cecilia fund or the Rev. Alan Gibson Choir Scholar Scholarship.

Interested in using St. Andrew's new tracker organ or our chapel instrument? Please review the church's Organ Use Policy and contact our Director of Music, Dr. Deborah Friauff, to discuss next steps.